In what has become a popular holiday tradition, the 10th annual performance of “A Seasonal Choral Flourish” was this weekend at St. Peter the Apostle Catholic Church, 812 S. Pearl Ave. The concert featured the Missouri Southern Chamber Singers, Madrigal Singers and Concert Chorale, with Dr. David Sharlow conducting and accompaniment by Glenda Austin. Sharlow, the university’s director of choral activities, said he began looking at area churches 10 years ago as a way to change up Missouri Southern’s traditional Christmas concert. St. Peter’s seemed to be the perfect fit for the concert he envisioned.“Even before they went in and renovated it, St. Peter’s was – acoustically and aesthetically – gorgeous,” he said. “There were some pieces of music I wanted to focus on with our choirs … and that church is the kind of space that music was written for.” “It wasn’t a bad crowd that first year, but it wasn’t anything like we have now.” “A Seasonal Choral Flourish” has been held at St. Peter’s every year, except for 2013 – when it was moved to First Community Church due to the renovation work. 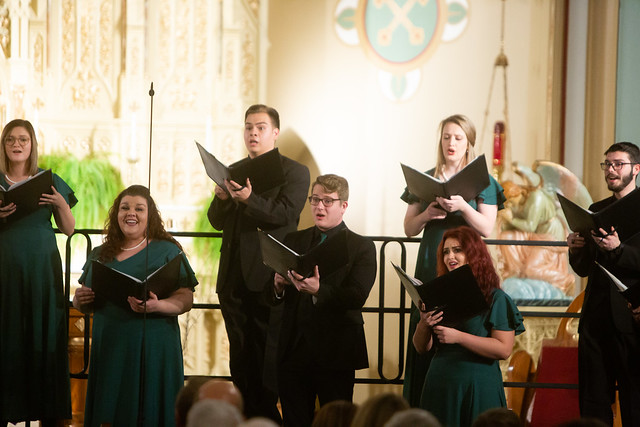