The students move back and forth across the floor of the Bud Walton Black Box Theatre, practicing a graceful series of steps as Erick Wolfe calls out their next steps.

It might be a demonstration of ballroom dancing were it not for the broadswords held in each of the participants’ hands. Their grips on the hilt of the swords is not without a certain amount of grace, as well.

A brief history of judicial duels, types of swords and a particular focus on broadswords and basic footwork was the focus of the first meeting of Missouri Southern’s Historical Sword Fighting Club, which will meet from 3 to 5 p.m. each Wednesday.

“We have a stage combat class next semester, but there are no HEMA organizations in town,” says Wolfe.

The Historical European Martial Arts Alliance focuses on the study and practice of historical fighting techniques, though Wolfe isn’t partial to the “European” label, which sounds exclusionary. Sword fighting is an art form that had no gender or ethnic barriers as it developed, he said.

“I thought a HEMA club would be an activity where students can have a socially distanced activity,” he said. “You’ve got a big, six-foot weapon in your hand, so no one’s getting closer to you than six feet; and, it’s something different.”

The first meeting found 10 students on hand for an overview that touched on some of the “great stories and stupid incidents” throughout the history of sword fighting. They then were able to get their hands on Wolfe’s collection of stage swords and historically accurate practice weapons to begin learning some basic techniques.

“It was a bit of an info dump, but I liked it,” said Blue Blackburn, a junior theater production major. “I’ve always enjoyed fantasy … ‘Lord of the Rings’ and things of that mythos,” so an interest in swords and sword fighting was a natural progression.

Blackburn and senior criminal justice major Courtney Taylor were elected the club’s co-officers at the end of the first meeting.

Those interested in participating are free to come and go as they please throughout the two-hour meetings. If weather permits, the club will get outdoors for practice sessions. And Wolfe is quick to remind participants that safety is paramount. 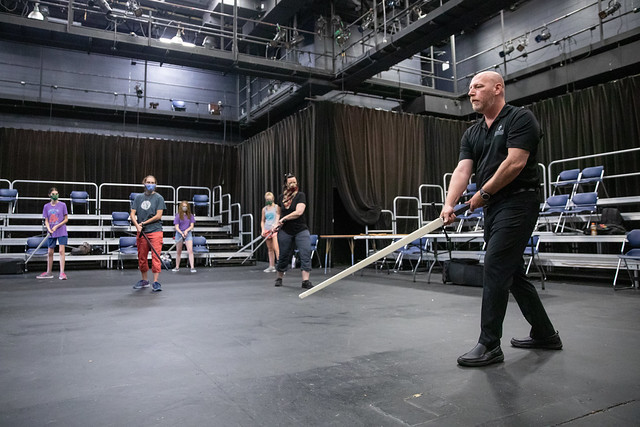